Ocean Beach Kiwi traces its origins back to the Kiwi SLSC, the Clifton SLSC and the Ocean Beach SLSC.

The Clifton SLSC was formed at Clifton Beach in 1961 after a breakaway from Waimarama. It was formed by Messrs B. McCarty and E. Clark snr. Clifton Beach while not a surf beach was however a popular swimming, camping, and boating spot and the start point for the walk to the gannet colony at Cape Kidnappers. Unfortunately support for the club was not forth coming and in 1964 the operations were transferred around the Cape to Ocean Beach, a beautiful untouched surf beach with a small bach settlement and much more in need of a surf life saving patrol. The club was renamed to Ocean Beach SLSC.

The Kiwi SLSC was formed in 1964 by Ivan Wilson after a breakaway from the Westshore Club. The club patrolled the southern end of Westshore Beach. Membership grew quickly and the club achieved immediate success in competition. The beach however was very safe with little surf and in the 5 years the Kiwi club was domiciled at Westshore no rescues were carried out. Members often trained out at Ocean Beach and quickly fell in love with this picturesque golden sandy surf beach. Due to dwindling membership numbers in the Ocean Beach Club an approach to Kiwi to form an amalgamation took place and in 1970 the Kiwi SLSC and the Ocean Beach SLSC amalgamated to form Ocean Beach Kiwi SLSC.

In the years since amalgamation the club has gone from strength to strength developing a unique club culture and performing hundreds of rescues along with achieving significant success in competition. The popularity of Ocean Beach is increasing all the time making a strong surf club essential on this difficult high risk beach. The club is proud of its continuous voluntary public service at Ocean Beach since 1964. 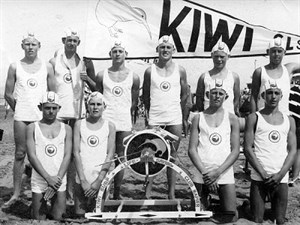 Early clubhouse - situated where the current public carpark is at Ocean Beach.